There is so much to see and experience in Rhodes, there are so many choices for visitors, that they could never lose interest. One could spend days walking in center of the City, which offers excellent examples of European Architecture of the early 20th century. The Post office building, was constructed during the first years of the Italian occupation by the Italian architect Florestano di Fausto. During the Italian occupation of the island it was used as the Post-Office (Palazzo delle Poste) and its function today remains the same. The Prefecture of Dodecanese building, formerly the Governor’s Palace, was built in 1927. It is a combination of many different architectural styles and its style strongly resembles that of the Doge’s Palacein Venice. The Evangelismos Church (Church of the Annunciation), the Town Hall and the National Theatre are a few more buildings that keep the memories of the island’s Italian past alive. Visitors can even enjoy the sun and the blue sea at the cosmopolitan Elli beach at the northern tip of Rhodes town, dotted with multi-coloured umbrellas, many canteens and a diving platform called the “Trabolino”. Modern hotels line on the beach which is one of the most popular on the island the beautifully renovated, historic Grande Albergo delle Rose which operates today as a Casino and five-star boutique hotel. 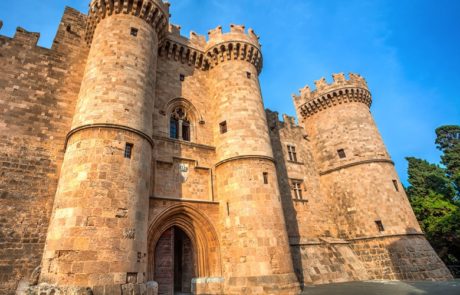 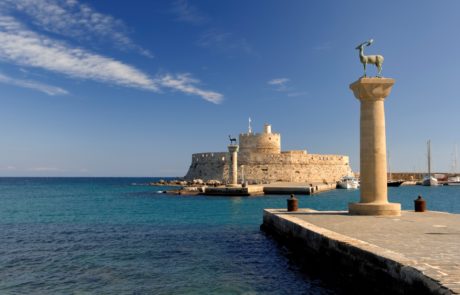 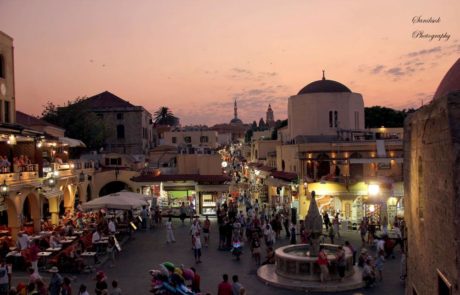 Rarely does one have the chance to stroll into twenty-four centuries of history and countless previous centuries of human presence, all within medieval walls, which surround 58.37 hectares of land. Even more rarely is one able to spend time in such a fabulous place, where, today, 2.500 inhabitants still share an amazing palette of multicultural influences. Such a place is the Medieval Town of Rhodes, a functional part of the modern city of Rhodes, which was inscribed on the UNCultures and time periods alternate with fascinating diversity as you enter the Old Town of Rhodes through the Gate of Freedom. Medieval fortress-like buildings, narrow alleys, minarets, old houses with their balconies, decorative, drinking or ablution fountains, tranquil or busy squares with shady trees, all contribute to creating an atmosphere of the past. A walk along the old city walls is an excellent way to appreciate this tremendous achievement in fortification and enjoy a superb overview of the old town. The walk passes along the “Curtains” or bastions, the walls and the gates. From the walls one can admire the Medieval moat, which has been magnificently restored as a walking area and is the site of the “Melina Merkouri” theater that hosts the Rhodes Summer Festival with concerts and performances by outstanding Greek and International artists. The cobblestone Street of the Knights, one of the best-preserved medieval streets in existence, is flanked by medieval Inns of the various “tongues” of the countries represented in the Order of the Knights of St John. At the foot of the Street, in Museum square, stands the Hospital of the Knights, which houses the Archaeological Museum. Across the square is the Church of Our Lady of the Castle. It was the Orthodox Cathedral of Rhodes in Byzantine times dating back to at least the 11th Century, becoming the Catholic Cathedral when the Knights occupied the City. The Street of the Knights is the main route from the port to the 14th century Palace of the Grand Master. The Palace, originally a Byzantine fortress built at the end of the 7th century A.D., was converted in the early 14th century by the Knights of the order of Saint John into the residence of the Grand Master of the order as well as the administrative headquarters of the state of the Knights. ESCO World Heritage List in 1988.